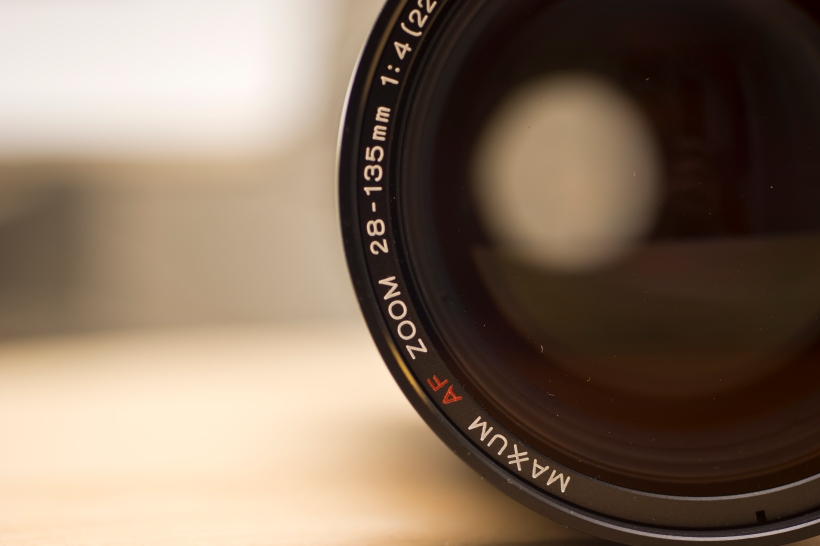 There are a lot of rumors and folktales about this one.

-made with Leica
-Minolta sold it cheaply as “thank you” to it’s users
-every time a picture is taken with it, Zooey Deschanel sings a quirky song

The facts are it takes solid, sharp and contrasty photos that performs well against the much more expensive Zeiss line of lenses. It has it’s drawbacks. 28mm is not wide enough and f4-4.5 is not fast enough, especially on a crop sensor, for general purpose. The minimum focusing distance is also pretty long, but it comes with a nifty macro switch that lets you in pretty close. It’s manual focus only but still comes in handy. I used it for some of the shots in the video that follows. The focus ring feels flimsy and is oddly located in the rear but autofocus is extremely fast on the Sony a77. For full frame or other high megapixel cameras, the resolution and detail it can capture with the right light is amazing. It’s also, like all other Minolta lenses, built like a tank….apart from the focus ring.

and now a video shot with it……making a pot of chili. Lost the footage of tomato puree going into it. blah, blah, blah just watch it. 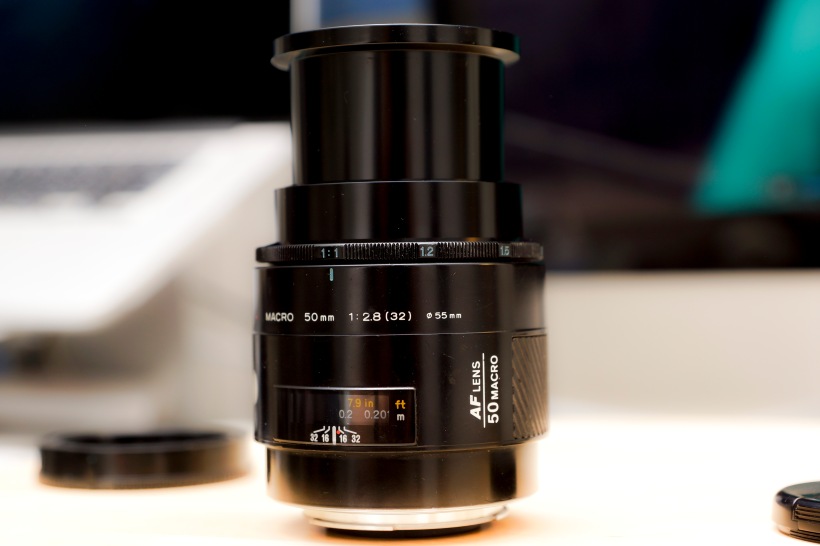 The Minolta 50mm 2.8 Macro. This oldie doesn’t have a nickname but it doesn’t need to. Here’s what it does have though…1:1 magnification. Many of today’s zoom lenses have the word “macro” written somewhere on the lens. It’s somewhat misleading and in best case scenario gets you as close as 1:4. Moreover much of  today’s dedicated macro lenses have a maximum magnification of 1:2. Serious macro photography requires  1:1 magnification.

The most popular focal distance is 100mm. The smaller the focal distance, the closer you must be, which essentially means there is less natural light to work with. This is one reason why the 100mm is usually preferred over the 50. However, if you put a 50mm on an aps-c sized sensor, such as the Sony a77, that gives a FOV equivalent of 75mm. This is a nifty tradeoff since this lens fits in your pocket. Minolta did make a 100mm 2.8 Macro lens that some considered to be THE best macro lens period.

The biggest plus is you can find this lens going on ebay for half the price of either the Sony equivalent, which is the same optically, or the 100mm Macro. As a bonus, the 50mm macro can double up as a medium portrait lens good for 1/4 body shots. 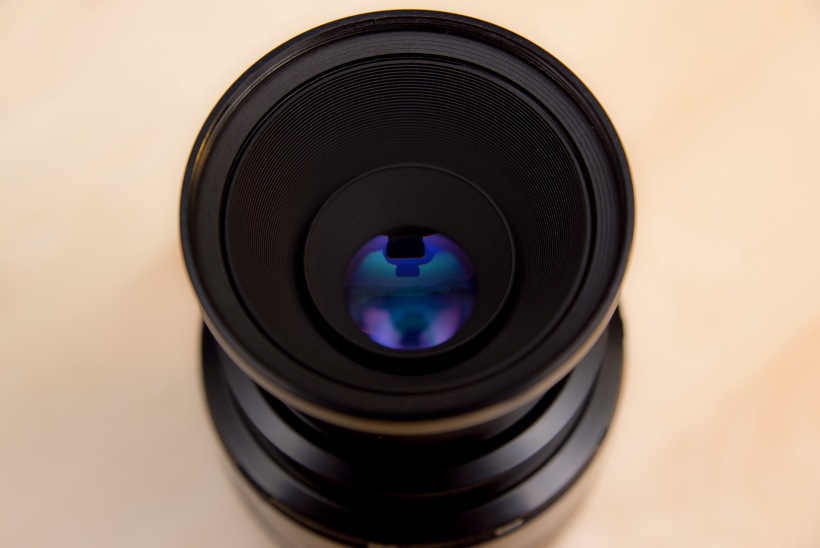 and now a video… 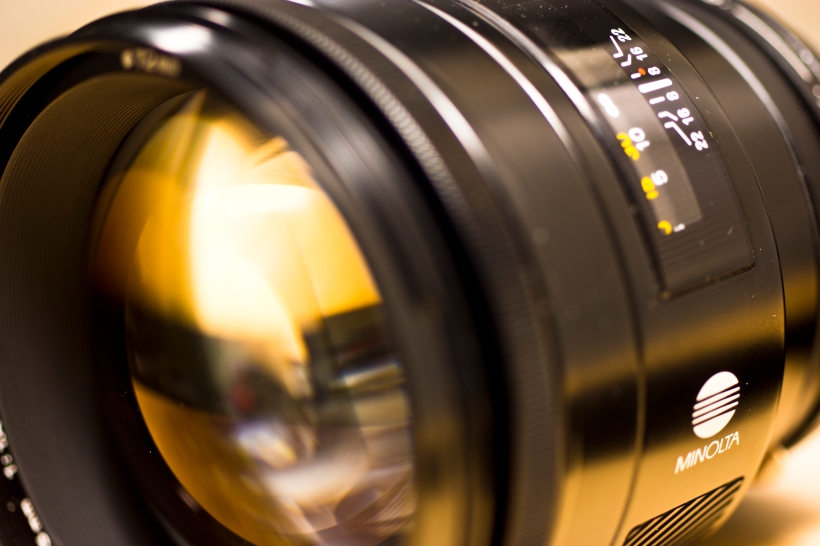 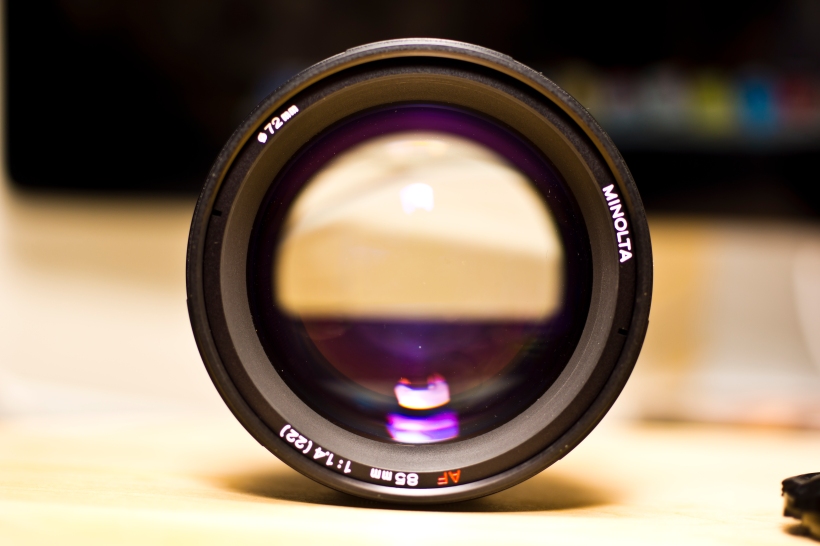 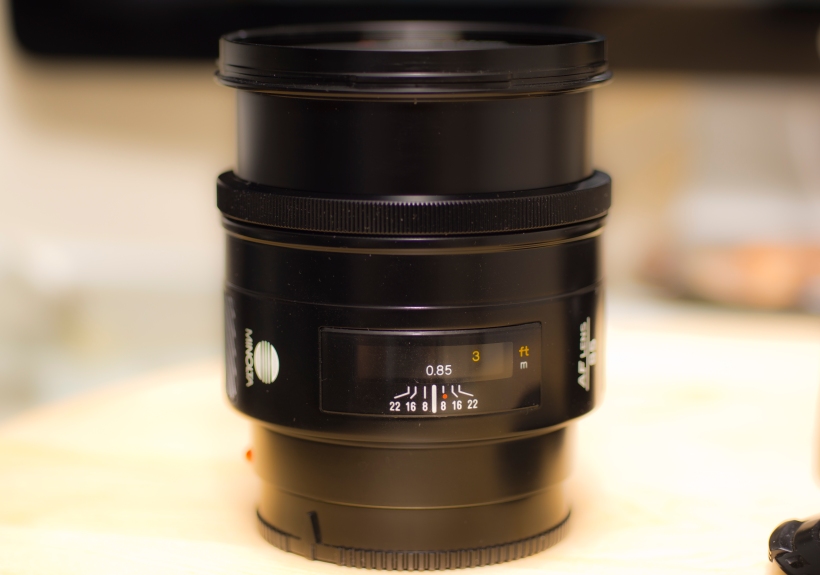 Minolta made some “G” or “L” class lenses in there first go round with autofocus. Legend has it that through it’s formal cooperation with Leitz (more known for it’s Leica division)  Minolta integrated unusually high performance optical technology that some would prefer over the twice as expensive Zeiss. With a focal length of either 85mm on a full-frame or 127.5mm on an aps-c combined with an ultra fast 1.4 aperture it makes for a beastly portrait lens. Creamy Minolta bokeh, rich colors, and a hulk-like build add to the credence to it’s nickname “Queen of Portraits.” and now a video: Sony lenses that are accessible to me are crap. Nice images. Cheap, but cheaply made. Plastic mounts. Flimsy focus rings. Lightweight, sure and that has its benefits but one drop and…..

This got me searching for some comparable Minolta lenses. Love! Metal mounts, brick-like build, brick-like weight (maybe that’s not a plus), and the colors! The creamy bokeh! My collection was unmanageable. I had to let a few go. I now feel compelled to shine a light on a few of them while they’re in my possession. The “Beercan” is probably the most well known of Minolta’s first generation AF glass. It is heavy. 70-210mm and a constant f4 is a pretty nice feature set considering ebay prices go around $150 US dollars. The autofocus is driven by the camera’s in-body motor and the glass is propelled by a screw. The zooming is in body so the barrel doesn’t extend as you zip across the range. It’s pretty long though and looks obscene mounted on the a77 without a grip. It’s sharp from around 5.6. The focus ring is narrow and not the best for full-time manual adjusting. 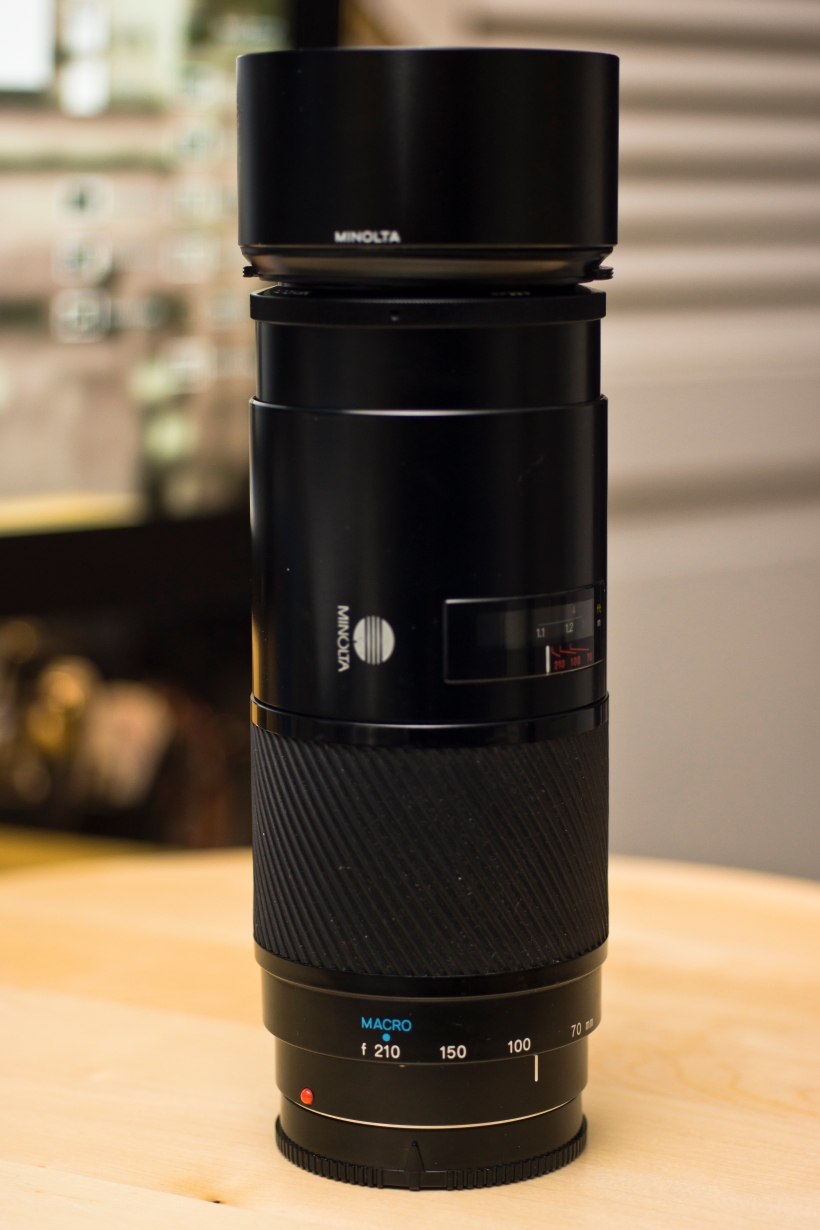 In the Sony/Minolta world of cameras, it’s a must have. It is legendary. 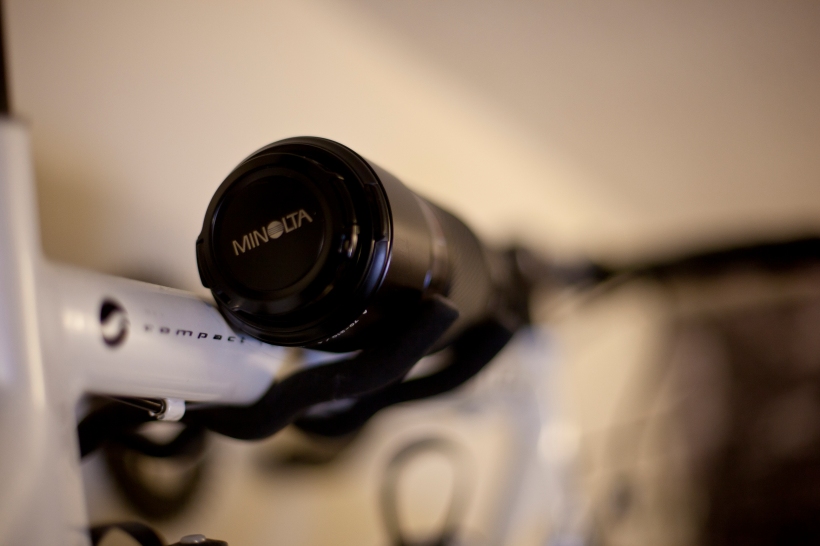 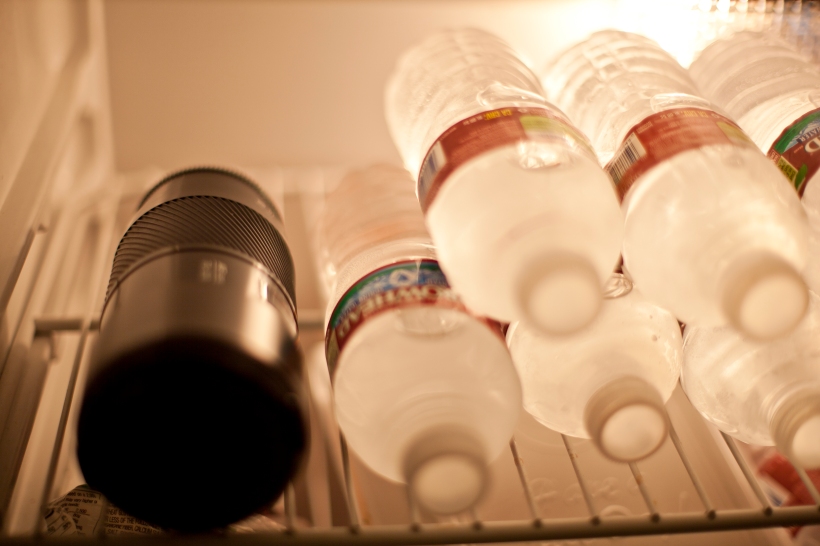 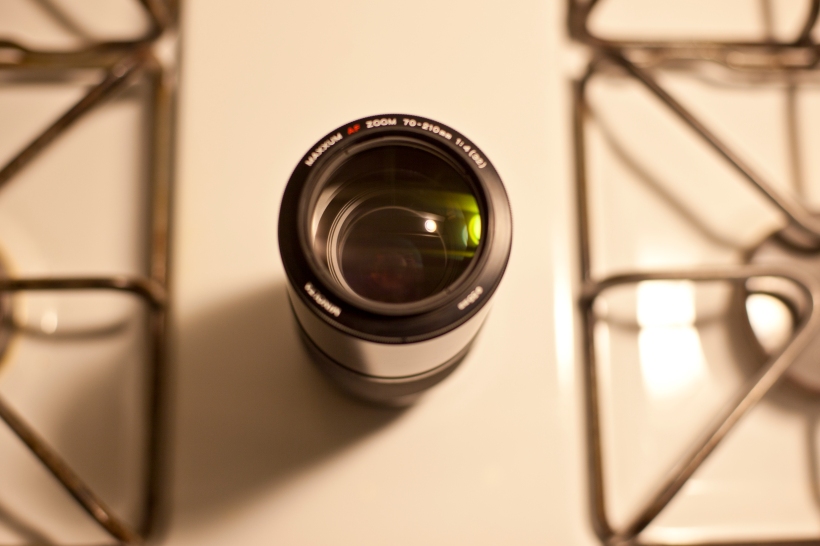 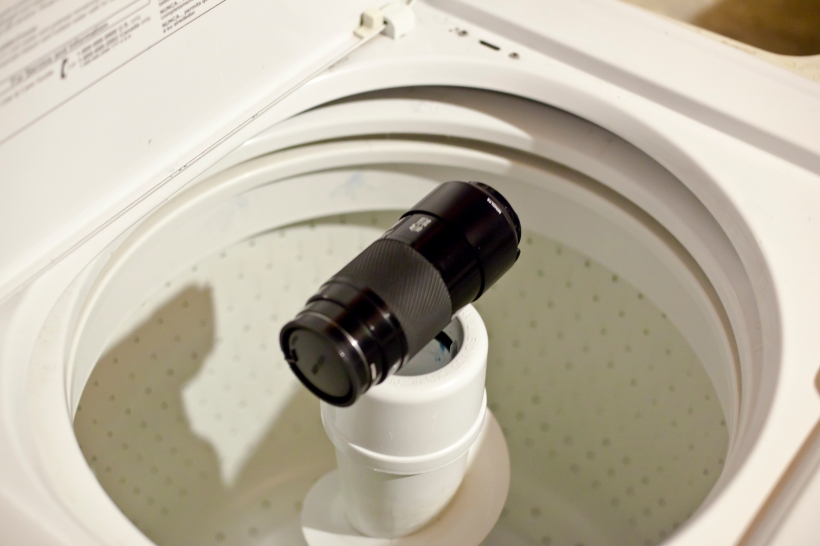 And now a video…

So Apple has revolutionized the way we interact with technology and have a big iPhone unveiling tomorrow. Sony have their own announcements tomorrow that may make the same sized waves in the world of photography/videography. One major camera that’s to be publicly introduced tomorrow is the SLT a99. It’s Sony’s first Full Frame camera since the a900 was released in 2008.

The a99 was created with special attention made to video. Some things that stand out are:

1) Sony’s switch away from it’s propietary shoe mount into the universal mount. There are many microphones, lights and recorders that can now be mounted without clunky chinese adapters.

2) The video resolution seems to be sharper. Sony’s line of SLT cameras had pixel counts many times greater than what standard Full HD 1080p required so there was a downscaling process that produced some soft images. Panasonic did a better job of scaling HD video from its sensor in it’s GH2. Sony’s RX100 point and shoot produced some sharp images as well. The a99 seems to be on par.

3) Manual Audio Gain Controls! Plus there’s a headphone in jack to monitor your recordings.

4) There’s an aps-c crop mode that will automatically detect if you mount a lens designed for the a77. It will crop the image accordingly.

This seems like an amazing camera along with the other rumored Sony product announcements like the full frame point & shoot RX1 and a pro NEX ILC. Can Sony inspire people to switch away from Canon and Nikon and in the process save itself?

For those that haven’t checked out sonyalpharumors.com, it’s a must if your into all things Sony. This guy works hard scrounging rumors from resources all over the globe and puts them together into intelligent product rumors.

I’ve been checking his website daily for a99 updates and here’s what the rumor is:

The specs add up to the most innovative and feature rich full frame camera and with the right price may be able to compete with the high end Nikon/Canon DSLRs if it’s any good in lowlight. 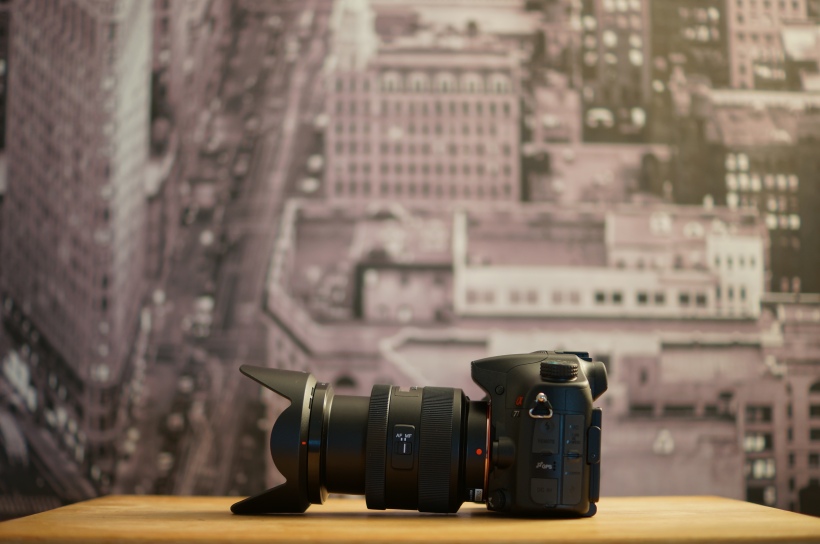 Here’s the link to the forum on EOSHD.

Fingers crossed it makes its way over to the a77. Just as the hack on the GH2, any modifications to the firmware that allows bitrate and/or audio controls will make for a much better movie making camera. The alpha line records at a maximum 28mbps in AVCHD 2.0 codec which delivers fairly decent video but lacks detail and resolution. The hack may not help that, but 28mbps AVCHD can break up in post. Generally the higher the bitrate the better. The hacked GH2 can deliver up to 176mbps all intra frames. They both use the same stock codec, which means the first (i) frame is the most detailed followed by b and p frames that is composed by the processor’s guess of where movement in the video will occur. This can create macro-blocking and odd artifacts in the video. As such, a hack producing a codec with all first i frames and a high bitrate is popular.

I’ve talked about how annoying Sony’s insistence on only auto gain control for audio is. The hack might open things up in that department, like it did for the Canon line of DSLR’s with the Magic Lantern hack.

There are also rumors of the new full-frame a99 Sony SLT and an update that will be released around that time for the a77.

With the NEX and RX100 topping the sales charts it’s exciting times for the Sony community!